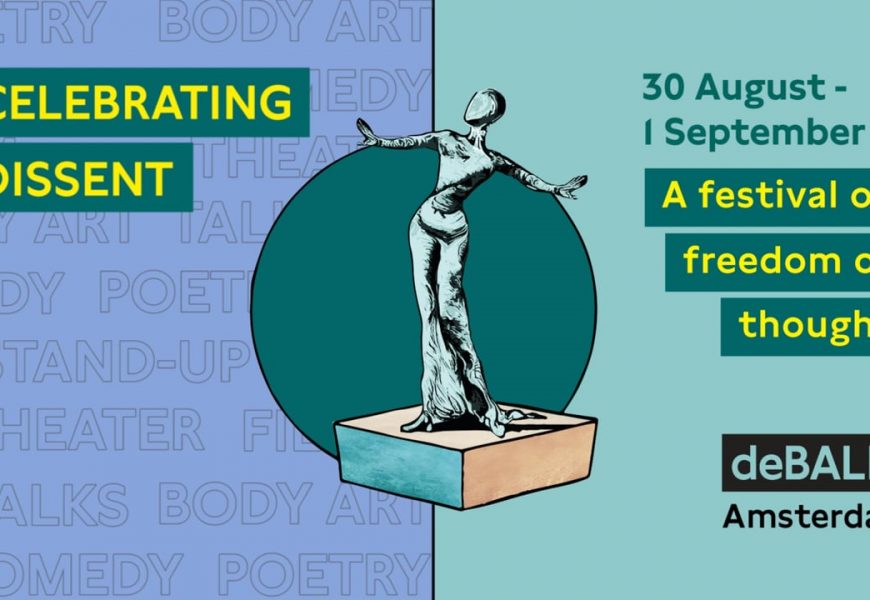 People from various countries and backgrounds came together in Amsterdam (30 August – 1 September 2019)  to celebrate freedom through theatre, talks, poetry, film and stand-up comedy. Women, non-believers and LGBT+ are often the victims of the strictest cultural and religious dogmas. The festival Celebrating Dissent honours their freedom. Freedom to think differently, freedom not to believe, and freedom to be yourself. A shout-out to everyone who fights for universal rights and freedom of speech.

Interview Marathon
This interview marathon offers an in-depth and intimate conversation with some of the keynote speakers of Celebrating Dissent. They share their personal stories. What drives them in their professional lives and how are they trying to make a difference through their work?

A Conversation of Women’s Dissent
In this opening programme six empowering and independent women from around the globe unite their strengths to speak about freedom of thought, freedom of expression and women’s dissent.

Touching the Holy Subject
What happens if you decide to become secular or atheist? Or if you are part of a religious minority in a country where religion is institutionalized in state and law? In such societies blasphemy rules are used to persecute free-thinkers and religious minorities, thereby making it hard to freely speak your mind and think differently.

Comedy, the Sacred and Islamophobia
In what way does comedy dismantle power? Some say that one should not be making fun of what is deemed a minority religion in the West. Always punch up, but never down. Or is mocking someone in jokes and conversations an act of inclusion, by assuming a fair level playing field?

Separation of Religion and State
Secularism is often seen as a Western concept. But the demand for separation between religion, state and law is particularly important for those living in theocracies and religious states. Speakers discuss how secularism is a minimum precondition for the rights of women, LGBT+’s, ex-Muslims and minorities. If one believes that these rights are universal human rights and not just Western rights, which conclusions should be drawn from it?

Women Against Gods?
In 2019 women still haven’t reached equality. In every religion, country and culture women have been oppressed and undermined for centuries. Men have constantly been shaping religion and society, always placing themselves at the centre of it along the way. How can we understand, thereby abling to change the future?

Neither Allah, Nor Master by Nadia El Fani
August 2010: Tunisia is in the middle of Ramadan under Ben Ali’s regime. Despite the weight of censorship, Nadia El Fani films a country which seems open to the principle of freedom of conscience and is also liberal in its relationship to Islam. Three months later, the Tunisian Revolution breaks out and Nadia is out in the field. While the Arab World enters an era of radical change, Tunisia, which initiated the wind of revolt, is once again a “laboratory country” for its outlook on religion. What if, for once, a Muslim-majority country opted for a secular constitution?

No Longer Without You by Nazmiye Oral
Renouncing your religion often has negative consequences for your family and friends. The performance No Longer Without You is a public conversation between a mother, Havva Oral (67), and her daughter, Nazmiye Oral (46), about the things that they never shared with eachother. In this programme we watch  a recording of the theatre play. Afterwards several guests talk about their own experiences.

On Identity
Identity politics is often seen as a way for minorities, women of colour and queers to emancipate and demand awareness and rights. At the same time contemporary identity politics can be divisive and polarising. How do we represent the oppressed and create spaces for their voices and prevent this from happening?

Fighting the Far-Right; Celebrating Dissent
People of colour are often silenced when they are being critical of religion. They are blamed for playing into the hands of the alt-right or labeled as Islamophobic. Often it is forgotten that they themselves, and their friends and families, are constantly subjected to racism and discrimination from these very groups. How do you make sure your voice is neither silenced nor abused?